Two brothers Jude and Greg are setting off on an impressive journey next January, to row from Gran Canaria to Barbados. The trip is expected take them 2 months, and they’ll expend on average 8,000 calories a day. That’s an unbelievable amount considering they’re only able to consume 6,000. Because of this, they’ll lose two stone in weight over the course of the two months, so it’s going to be a very tricky challenge. They’ve decided to call themselves Ocean Brothers, and you can be track their daily progress on the Ocean Brothers’ site.

But this task isn’t just for their own benefit; the pair aged 18 (Jude) and 27 (Greg) and are doing the row for a very noble cause. They lost their step dad to skin cancer just over two years ago and are rowing to raise £100,000 for the British Skin Foundation. Every penny raised goes straight to the source that matters - research into skin cancer and nothing more. Just to make this feat even more heroic, neither of these two men have taken an interest in rowing before, in fact they hadn’t rowed at all until a few months ago. Having started the whole process of organisation from scratch in February 2017, they’ve made huge progression in less than a year. They’ve raised £34,000 towards their total of £100,000 and in addition to that they’ve collected £75,000 to cover all their expenses through corporate sponsorship. They’ve been featured in the Daily Mail and Guardian and are well onto a winning streak.

Sir Ben Ainslie said, “Big respect to Greg and Jude as they battle the Atlantic for such an honourable cause, inspired by their own personal loss. You will change people’s lives with your endeavours, Brothers. Row on. Row on”.

will be a row from Lymington, Hampshire along the South coast heading East and finishing up the river Thames in Putney Embankment. This is set to take place on Monday 16th October, any support would be welcomed. The brothers will cover over 200 nautical miles and will be really getting to grips with life on the boat over this longer stretch. Their toilet is a bucket, their food dehydrated freeze dried packets to consume and their water comes from a desalinating water maker. On board they are fitted with a GPS, chart plotter, AIS and electronic compass from Raymarine, all of which is powered by two large solar panels fitted to the roof of the bow and stern cabins.

The two brothers have pretty normal lives when they’re not on the water. Jude works in the Haven Bar & Restaurant in Lymington, whilst Greg is a junior doctor who works in accident and emergency. Neither of the two quite know what is coming next, however. Jude knows once this is over he’d like to travel and work and Greg is undecided on his path to come. Both have backgrounds in the outdoors with Jude sailing from the age of 6 moving up to the 420 class of dinghies and also competing up to national level. Greg is a climbing and ski instructor and was the youngest Briton to climb Mt Blanc at aged 13. 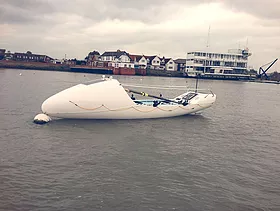 This is a very rare challenge that’ll place them in an elite group. In comparison, over 6,000 have climbed Everest, 550 have been to space - but only 317 crews have rowed the Atlantic successfully. 153 crews have failed the challenge, and 6 have died attempting this feat. This is no wonder when you realise the pair will have to row non-stop both day and night, each taking a two hour shift at a time. This means the brothers will never sleep for more than two hours at a time unless conditions become so bad they have to retreat to the cabins. The cabins are watertight when the hatches are shut and the 23 ft ocean rowing boat can capsize and self right. On calmer days one of the weekly chores is to scrape off barnacles from the hull to make sure they keep as little resistance as possible.

Another one of their aims in the attempts to raise awareness of skin cancer is highlighting the importance of sun cream. They’re trying to show that anyone can slap on some sun cream to reduce their risk of sunburn. Sailors and boaters are at a higher risk due to their lifestyle, and just one episode of painful sunburn every two years is enough to treble your risk of melanoma. La Roche-Posay and L’Oréal are very kindly sponsoring the brothers with more than enough suncream for all their training and the trip itself. Likewise, Sunseeker MD David Willis has decided to sponsor the brothers for their remarkable endeavour in memory of their father. Ocean Safety don’t normally gift their products but for such a noble cause they’ve given the brothers £4,000 worth of safety equipment.

will be sending back videos and photos every stroke of the way. To find their Facebook page and/or donate to this incredible cause head to their website www.oceanbrothers.co.uk and follow the links.

The brothers thank you in advance for your time and support.

Abenteuer Atlantik – Back from the USA