Anyone spending time on the northwest coast of Spain on Tuesday may have seen huge plumes of thick black smoke pouring into the sky near the Isle of Toxa. Many people rushed to the scene as a collision caused one large tourist boat to combust entirely, injuring many on board.

This was a sightseeing trip giving holiday-goers the chance to explore the local attractions in an area full of beautiful islands, blue oceans and spectacular green coastlines on the far Atlantic side of Spain. The vessel was pretty large and had 52 people on board, with 48 of them being paying customers. The tour was already well underway and was cruising close to the shoreline near the small coastal municipality of O Grove. It’s unclear as to exactly how the incident occured, but a collision with another nearby boat was what started the fire. From there on in, the flames spread at a seriously alarming rate until the whole vessel was swallowed by bright orange flames and a tower of smoke that could be easily seen from way down the coast. 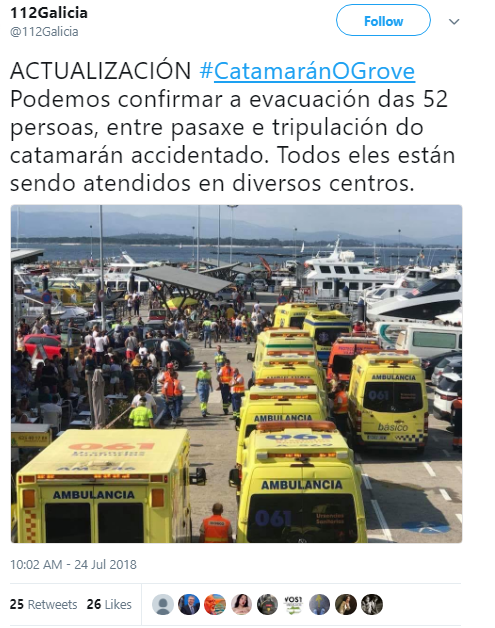 Many passengers decided that they had no other choice but to evacuate and plunge into the sea, leaving them stranded in the water, presumably without many of their belongings. Luckily, locals were quickly at hand on smaller boats to come to the rescue of many passengers, before a larger number could be seriously harmed. People were loaded onto local boats and taken to dry land at Porto do Grove as the fire services rushed to the scene. Firefighters were still tackling the blaze two hours later, but it was eventually eliminated soon after.

Meanwhile, two tourists were being airlifted to a local accident and emergency unit with severe burns; their current state is yet unknown but both are still hospitalised. At least three others were taken to local hospitals with less serious injuries and the casualty figures are still expected to rise.

Obviously this was a freak accident, and the locals must be commended for their swift response and willingness to help. The fire services arrived very quickly and dealt with the blaze as safely and securely as possible.