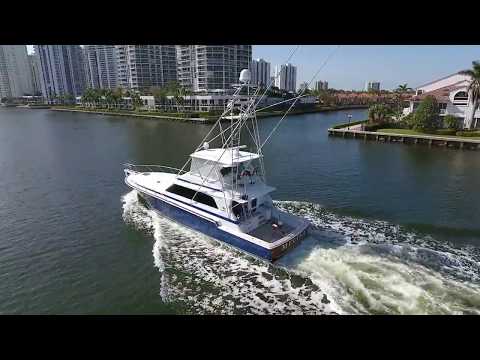 History
“MELINA” began as a production Bertram 60 Convertible. The owner has spared no cost upgrading this vessel: upgraded all navigation electronics, reconfigured and upgraded the interior, re-powered with new engines, marine gears, and new generators. She has very low hours on the main engines and generators since 2008. New shafts, struts, propellers, shaft logs, rudders and rudder ports have been renewed in the past several years as well.

The interior was reconfigured and significantly upgraded in 2007. The most notable upgrade was the destruction of the galley down arrangement and converting the space into a custom Tackle Room. The galley is now in the forward salon area and has solid surfacing counter tops, refinished cabinets, wet bar, and new appliances.

The tackle room is a one of a kind custom space that securely stores the extensive collection of professional Bill and Tuna fishing equipment. The reflection from the phenolic mirror material creates the appearance of a much larger area.

The head spaces were renovated and upgraded with new marine grade toilets, solid surfacing, wall coverings and overhead coverings during 2007. The soles are Teak and Holly. New black water holding system and all hoses have also been renewed. The current configuration and finish is only found in one of a kind, high quality, custom yacht.

The vessels exterior was professional prepared and painted in 2015 at American Custom Yachts. The vessels superstructure is white with blue feature stripes that match the hull coating of dark blue. The hull was previously light blue. The transom and raised fiberglass toe rail have been coated using an Air Teak or similar coating system and significantly adds to the visual appeal of the vessel.

Melina is tricked out for tournament fishing and has a proven record. If you want to own one of Bertram’s greatest custom sport fishing boats, this one takes the trophy.
Disclaimer
The Company offers the details of this vessel in good faith but cannot guarantee or warrant the accuracy of this information nor warrant the condition of the vessel. A buyer should instruct his agents, or his surveyors, to investigate such details as the buyer desires validated. This vessel is offered subject to prior sale, price change, or withdrawal without notice.
customContactInformation
Morgan Bertram 954-614-2087
...Read full description
KategoriMotorlu tekne
AltMotor Boats
Satış Durumuavailable
ÜreticiBertram
ModelConvertible
Üretim Yılı1994
Uzunluk18.29
Beam5,16 m
DurumUsed
SaleTrade
Motor üreticisimtu
KW3600.0 hp
Yakıt kapasitesi1630 gallon
Temiz su kapasitesi250 gallon
Kamara sayısı3
WC & bathrooms2